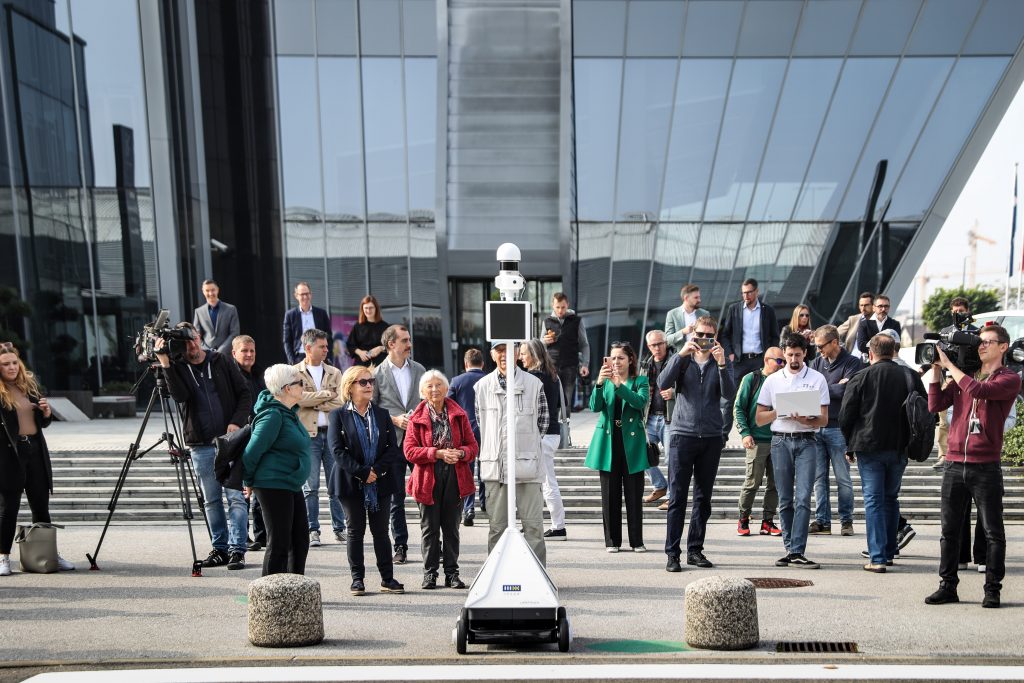 Robots are making their transition from their usual environments into public life, among people. Today, one of such robots that will help people safely cross roads was tested by the AV Living Lab. The findings of the test will be advantageous for the future advancement of robots in public areas.

On 14 October 2022, AV Living Lab hosted a presentation on the functioning of the intelligent pedestrian assistant to anyone (IPA2X) in our ecosystem of BTC City Ljubljana, which is a result of the cooperation with international partners in the scope of the European R&D project, co-funded by EIT Urban Mobility.

The AV Living Lab joined the project with a vision of implementing a Zero Accident Society and care-free mobility for all. Last year alone, the Slovenian Traffic Safety Agency reported 524 traffic accidents involving pedestrians, predominantly children and the elderly. A fifth of these accidents ended with a serious bodily injury or death.

The intelligent pedestrian assistant IPA2X is one of the first of its kind, providing for safe crossing of roads at crossings without traffic lights. It is mainly intended for the elderly, children and the physically impaired.

The robot represents a type of mobile traffic light with smart sensors, such as LIDAR, ultrasonic sensors and cameras. When a pedestrian expresses their wish to cross a road, the robot determines when crossing the road is safe and moves to the middle of the road. The robot uses light signals to warn drivers to stop and signals the pedestrians when it is safe to cross the road. Via the V2X communication protocol, it connects to the vehicles nearby and, in a timely fashion, lets them know they should reduce their speed. It is a suitable solution for roads where traffic lights are not a reasonable option, as their aim is to increase the safety of pedestrians without the need to ensure the constant presence of traffic police or municipal security.

In order to gain feedback on the future development of the robot assistant, the AV Living Lab carried out a presentation among the elderly, who were selected as the project’s target group. The presentation took place in a real-life situation, at the pedestrian crossing on the Ameriška street in BTC City Ljubljana.

“The opinions shared by the elderly will be used in the future development of robots designed for use in public areas, such as delivery robots, robots for cleaning and landscaping, security, robots that offer support to firefighting services and last but not least robots as personal or shopping assistants which will help us bring grocery bags from the store,” said Blaž Vukelić, Head of the European Projects at the AV Living Lab.

An important part of the presentation focused on determining the acceptance level of this innovation among the elderly and society as a whole. Robots have been present for decades in highly controlled and managed environments. Due to the exceptional development in the field of robotics, robots are moving to the community, into less-managed environments, and are taking on a more human-like form.

“Past experiences in Slovenia with implementing robot use in restaurants and hospitals have been positive. The robots have taken care of tasks for which it is hard to find workers, and they have helped us tackle the challenges related to the aging of the population. Since communication with robots will be made available in mother tongue, even less technologically skilled people will be able to communicate with them. Taking into account the projections, we will be sharing our pavements with the robots in the coming years, though it is not yet known how we will accept them and control them when they start appearing in public areas in large numbers. That is why we need more presentations of this kind, discussions and feedback from users,” said Blaž Vukelić.

With the presentation of the first robot of this kind, BTC City Ljubljana has proven to be the leading environment for testing and implementing new mobility-related technologies in the region.

“The BTC City Ljubljana ecosystem is a living testing environment for innovating and developing technologies of the future which we co-create with numerous partners. In the field of autonomous mobility, we have already presented the autonomous vehicle Navya and autonomous drones; now, we are entering the field of testing autonomous robots in public areas,” said Miha Mermal, Chief Marketing Officer and Chief Sustainability Officer at BTC.

The development and presentation of the IPA2X robot are part of the European project, co-funded by EIT Urban Mobility, encouraging the transformation of urban mobility. Along with the AV Living Lab, involved in the project are also the Technical University of Munich as the leading partner, as well as AMAT, the Technical University of Prague, Evidence, Hipert, Lifetouch, Škoda Auto and the cities of Milan and Modena.

Safely across the road – with a robot assistant

Mobility for all – and long into old age – has become…

In 2021, AV Living Lab, in collaboration with the Slovenian government’s Business…

Use of drones at Ljubljana Fire Brigade

This website uses cookies to improve your experience while you navigate through the website. Out of these, the cookies that are categorized as necessary are stored on your browser as they are essential for the working of basic functionalities of the website. We also use third-party cookies that help us analyze and understand how you use this website. These cookies will be stored in your browser only with your consent. You also have the option to opt-out of these cookies. But opting out of some of these cookies may affect your browsing experience.
Necessary Always Enabled
Necessary cookies are absolutely essential for the website to function properly. This category only includes cookies that ensures basic functionalities and security features of the website. These cookies do not store any personal information.
Non-necessary
Any cookies that may not be particularly necessary for the website to function and is used specifically to collect user personal data via analytics, ads, other embedded contents are termed as non-necessary cookies. It is mandatory to procure user consent prior to running these cookies on your website.
SAVE & ACCEPT